The man took centuries for its coexistence with nature countless flowers. Many of them are beautiful, Other useful and binds to them a number of notable traditions. Almost everyone can tell, that handful is his favorite. Although it may be love surprising and understandable. Someone like roses, another must hop. Even many of you can love this or that flower because, that it is expensive, whom they love themselves. Maybe cats. Although he says, that cats do not love anyone, it's not true. love shunt. therefore, sort of, not all. But some cats certainly love to shunt. The first Santa was allegedly reported in the Tuscan town of Nepi, and hence received its Latin name Nepeta. Another story in turn derives from the name of a scorpion, nepa, against the poison should be catnip healing. One thing is certain, that these herbs are far from just flora Italian hills. In Europe, but also Asia and Africa we find them good 250 species. If the number of growers of herbs may be surprised, what can šanta, then for cat's realm of limitless possibilities. What only when he finds out cats.

What is catnip plant?

Universally known and chanting is of course catmint, N. cataria. It is a pretty wild up to a meter high plant with tiny white flowers. But by far not as often seen. Far more common are in gardens and parks less frequently used, mostly blue-flowering species and varieties derived from N. racemosa and its hybrids (Nepeta × faassenii). Their cultivation has in our rich tradition and enjoys great popularity. Za pozoruhodné lze považovat například variety 'Walker´s Low', robustní 'Six Hills Giant', raná 'Grog', drobná 'Kit Cat' či bíle kvetoucí 'Snowflake'. For years, the above all, that was about šantách generally known and what were considered. Yet in our country for decades now and then grown and representatives of the so-called. "Higher santo '. already in 20. years 20. century in our country grew Caucasian type N. grandiflora reaching up to 120 cm. Similarly N. sibirica, which has a strikingly large blue flowers and a very specific aroma. Virtually all high SANTO have fragrant leaves and flowers between the colors blue or royal blue prevails. Since this is a group in recent years, relatively richly bred, There is also varieties with white flowers, pink or lilac purple. Noteworthy are also drawings of flowers inside and colored goblets. A number of species has a fairly large leaves, in the fall noticeably golden color. Among the most important are N. kubanica, subsessilis, nervosa, naked a manchurensis. Honorable exception is N. govaniana with light yellow flowers. 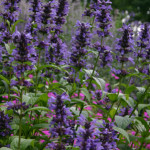 Where are doing Santai?

Generally speaking, Santa considered drought-loving herbs, sun and poor soil. For small-leaved species, it is also largely true. High species with larger leaves tolerates sun, but can not bear the full and permanent sunburn přísušek. Soil with good drainage, Rather slightly sandy to rocky, benefits all kinds. On humus garden soil nutrient they have Santa in the summer tend to rozléhání. Low Santo are known for their good recovery after the re-cut, and the ability to re-bloom in late summer and autumn. All species are well reproduced in the early spring cuttings with foot or in summer division after a deep cut at the end of flowering. With the success is also her. Santa can be in the garden very well used especially their modesty and long blooming period. Low species are exempt very well with roses or perennial trims rebate. High species are very well meet with daylily, třapatkovkami, daisies and peonies. Very good complement as well as medium grasses, because they begin to bloom earlier, than the stalks begin gaining altitude and late summer fits well with remonty.

Cats should definitely try out Santa, He picked her, and then, if possible daily littered, or at least it ožužlávaly. However, if you hate cats, know, that Santa is an excellent herb for various ailments of body and soul. From repellent through anesthetic to hallucinogen. Just choose and trust.